Stories behind the Shining Gems of AISSMS 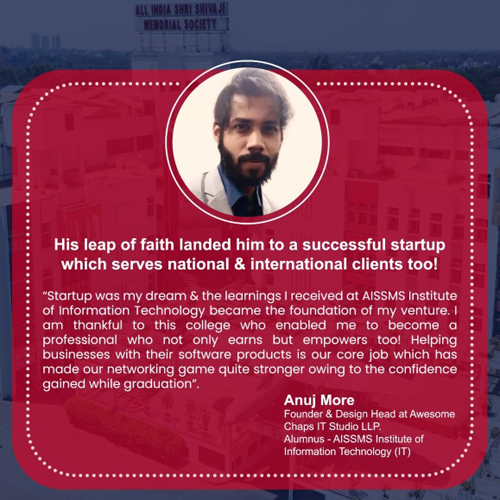 Mr. Anuj More, alumnus of AISSMS Institute of Information Technology was a best outgoing student since the very beginning. He participated in various & all possible contests (domestic and international), which exposed him to what and how the industry works. These early-stage lessons and learnings became his foundation and are proving beneficial to him even today.

With the encouragement of the faculties he always went beyond the regular syllabus to learn a little extra.

Here is a list of his achievements during the graduation-

‘’A leap of faith is always better than a leap of doubt’’.

Today Mr. Anuj is the Founder & Design Head at Awesome Chaps IT Studio LLP. It was established in 2017. It is a company that helps businesses build their software products with an awesome User Interface (UI) and bespoke User Experience (UX). It nurtures new ideas, researches them, and sets them into action. Along with UI/UX, they also happen to work in Mobile App Development (Native and hybrid), Web App Development, and Graphic & Branding design.

Over the period of 3 years, Awesome Chaps IT Studio LLP has worked with more than 60 domestic and international clients. But it was not as smooth as it looks; Setting up a firm from scratch for sure is difficult considering factors such as sufficient capital, a good plan of action, number of working hours, etc.

When one start afresh, networking and acquiring new clients is a vital role. But with a strong determination & a few initial hiccups, all sets well; just like Anuj did. He acquired clients not only from India but the US, Canada, Europe (Germany, Spain, Czech Republic), Australia, New Zealand & delivered 60+ projects (domestic and internationally). He believes that profit is not only monetary but networking, meeting new people with amazing ideas, continuous learning, and making a better place for yourself along with other people you surround yourself with is the real wealth.

He considers himself fortunate for getting constant support from his friends and family and especially his elder brother who stood strong for him and believed his dreams. After all, leaving an ongoing job for a new venture is a risk but passion and consistency is the only trick to overcome this risk.